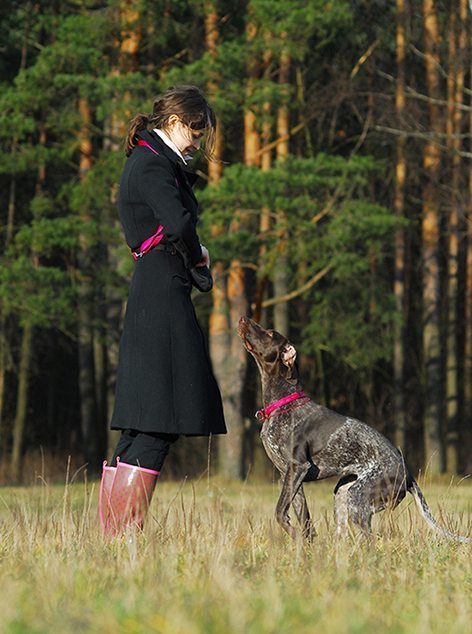 The subject of dog training has been of great enough interest that a library of books has been written about it. Many are specialized, such as how to train a German Shorthaired Pointer to hunt birds or step-by-step books on training for obedience work. The list is long but all ways of training are based on some particular principles and methods.

There can’t be the only one way of “how to train your dog“, because dogs are so different. Different breeds and even personalities. A sensitive dog may be trained most efficient with rewards and the hyper energetic Doberman may respond better using some force when needed (however, every dog might be trained using only positive method with no force).

The age of the dog is another important consideration since it is easier to train a puppy which is as a plain white paper sheet, than a mature adult with inveterate habits.

The objective of the training is an important matter. Many professional trainers accept puppies at four months of age in their training programs. First level usually is based on playing method at this age. It should be fun for a pup to learn new commands.

Some breeds inherit aptitudes to perform functions by developing and training themselves in some way. The GSP is a good example. All that is necessary is to take one into a field that has birds and pointing develop naturally. The Greyhound is another good example, all you need is just a rabbit and it will run as fast as the wind after it.

However, it requires training to perform their functions properly, especially when it comes to hunting dogs.

I personally combine Reward Method 80%-90%. Not 100%, because sometimes I punish my dogs when I think it will give the better result or will be more efficient at that particular moment or situation. The punishment I use is a harsh command or jerk on the leash if a command is not enough.

It is important moment to know, that you should always give punishment at the moment itself, and never afterward. Your dog associates your punishment specifically with what it is doing at that moment. If, for example, it has just torn up your newspaper but is now running up to you joyfully wagging its tail, it has now completely forgotten about the newspaper. At that moment, the overpowering fact is that your dog wants to make contact with you and is glad to see you and you react to that with punishment…

A dog should never be punished for deeds you do not like, but rather corrected. What’s the difference between a punishment and a correction? A correction is when you give a command of disapproval at the moment the deed is about to be done or is being done. A punishment is anything thereafter.

For example, a dog jumped through your screen. You come home and find the dog not where it is supposed to be. Believe, it is too late to communicate with the dog that he should not be jumping through the screen, unless it jumps in front of you now.

To punish a dog for a past deed only confuses the dog, hurts the trust between owner and dog, and does not teach anything useful. Dogs do not have the same sense of logic that humans have. They do not plan or reason out situations like humans do and they really do not analyze what and why has happened before. Dogs live at the current moment – here and now.

There are many more methods you can just imagine. I wrote a very basic and most popular once.

I would recommend to choose the method which fits you most and than look for a good trainer in your region. It is important to train your dog with professional trainer at least for a two months, that you would learn how to find the perfect contact with your best friend.
First of all you should learn it yourself to be able to teach your dog.

Interesting to know how you train your dog and which method you go for, so please, share it with us and stay tuned for the next updates in my blog!

(29327)
$7.32
MARK THE SPOT: GO HERE formula encourages pets to eliminate where you want them to HOUSE TRAIN WITH ... read more
(as of January 29, 2023 - More infoProduct prices and availability are accurate as of the date/time indicated and are subject to change. Any price and availability information displayed on [relevant Amazon Site(s), as applicable] at the time of purchase will apply to the purchase of this product.) 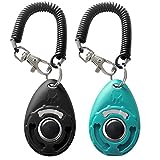 (30226)
$5.99
▼Come in 2 pack button clickers with wrist strap in 2 different colors: Blue, Black ▼Can be used to ... read more
(as of January 29, 2023 - More infoProduct prices and availability are accurate as of the date/time indicated and are subject to change. Any price and availability information displayed on [relevant Amazon Site(s), as applicable] at the time of purchase will apply to the purchase of this product.)

How to Talk to Your Cat About Gun Safety: And Abstinence, Drugs, Satanism, and Other Dangers That Threaten Their Nine Lives

(10307)
$9.46 $5.14 (as of January 29, 2023 - More infoProduct prices and availability are accurate as of the date/time indicated and are subject to change. Any price and availability information displayed on [relevant Amazon Site(s), as applicable] at the time of purchase will apply to the purchase of this product.)

Dog Training Books: How To Choose The Right Training Method

$4.99 (as of January 29, 2023 - More infoProduct prices and availability are accurate as of the date/time indicated and are subject to change. Any price and availability information displayed on [relevant Amazon Site(s), as applicable] at the time of purchase will apply to the purchase of this product.)
﻿